This is Technology Bloggers 150th article 🙂
Well done and thank you to all our brilliant writers (Hayley included), as well as readers and commenters who have helped us get here!

A fraction of the ever-expanding field of nano-technology, nano-robots, a.k.a. nanobots, hold some of the most promising possibilities in the fields of technology, engineering and medicine. They also pose some of the most complex hurdles, such as automation, replication, control and finding viable energy sources to enable movement.

Nanotechnology involves the study and micromanipulation of anatomic particles up to 1 nanometer, with scientists working to develop nanobots in fields less than 100 nanometers in size. Transmission electron (TEM), scanning electron (SEM), scanning tunneling (STM) and Atomic Force (ATM) microscopes are large, powerful machines that make all aspects of nanotechnology, including nano-robotics, possible.

Nano-microscopes allow researchers to isolate and observe single molecules, including chemical reactions that occur upon moving, eliminating and rearranging molecular structures. This base knowledge is essential to understanding, creating and ultimately finding solutions so that nanobot technology will reach its full potential.

Up until recent years, the development of nanotechnologies maintained “top-down” construction. The advent of “bottom up” creations on the nano-scale provide scientists the ability to create smaller objects; in addition, components can be “grown” to allow greater adaptation to specific environments or inclusion of specific properties.

Scientists are literally able to “grow” carbon nanotubes and “string” together nanowires, creating desired properties such as hastening conduction or reducing heat output – properties that make for tiny, efficient particles. In theory, by building a nanobot from the bottom up, scientists begin to find solutions that allow for greater control mechanisms and possibly self-replication of the nanobot. 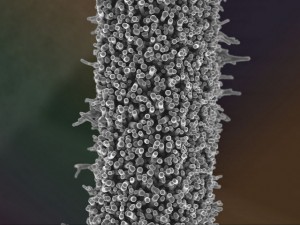 Carbon nanotubes – building nanotechnology from the bottom up.

The greatest benefit of working bottom-up is that, rather than altering materials to work in a desired fashion, scientists build nanostructures and nanobots with proper compounds from the outset.

Although practical applications in medicine and technology have yet to be fully realized, nanobots are no longer figments of science-fiction imagination.

Lack of autonomy, largely associated with insufficient or unrealistic sources of energy, leaves a large barrier to the potential uses of nanobots. Batteries and solar sources are impractical due to size and, although a scientist can guide the nanobot with the use of magnets, they are not ideal. For example, a physician using a nanobot to treat a patient would need to maneuver the nanobot from outside the skin while also observing inner structures of the body.

Within the past year, scientists announced the creation of a nano “electric motor.” Utilizing principles of adsorption, a molecule attaches itself to the outside of a piece of copper; an STM probe focuses electrons onto the molecule, providing a source of energy and means to control direction. The large, cumbersome STM still makes this impractical in many ways; however, scientists are able to study this single motor and hypothesize ways to alter this and thus to apply it to nanobots.

Many scientists believe self-replication, most likely by programming the nanobot to micromanipulate surrounding atoms to create duplicates of its self, is essential to the realization of the many medical and technological applications.

In addition, a truly autonomous nanobot would be able to recognize, react and/or adjust to varying environmental conditions, including the presence of other nanobots; scientist could also program them for molecular assembly.

Many believe nanobots will allow for precise diagnostic capability and treatment of diseases such as cancer, as well as genetic disorders. Advances in communications, green energy, computer electronics and semi-conductors appear limitless.

Although still in its infancy, scientists across many fields hold much promise for nanobot technology. An autonomous nanobot, able to adapt its environment and self-replicate, could be the key to early detection and the cure of many diseases; in addition, nanobots will play an important role in sustainable or renewable energy sources, engineering and advancing computer technology. What do you think?

For further information check out the article on nanobots over at MicroscopeMaster. Links in my bio.

5 thoughts on “Nanobots – The future in Nanotechnology”