At number 7 this year, is Virgin Atlantic’s glass floor planes. On his blog, Richard Branson posted on how Virgin Atlantic Airlines (in which he owns a 51% stake) are planning on launching a glass-bottomed plane. Branson commented on how he was “thrilled to announce that Virgin has created another world-first with the introduction of the technology required to produce the world’s first glass-bottomed plane.” 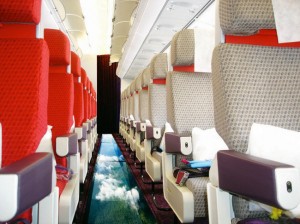 Virgin Atlantic also posted the jape on its official blog, stating that thanks to private funding from Richard Branson, the technology had now been developed to give passengers the experience of a transparent floor.

The floor of a plane couldn’t really feasibly be made transparent though; the luggage and engine have to go somewhere!

One of the first articles I came across this April Fools’ Day was the Metro’s April Fools’ Day 2013 round-up. The Metro had taken screenshots of all the top April Fools this year, including Goolge’s, Facebook’s, YouTube’s, Tesco’s, The BBC’s and more.

I only realised when I got to the end of the post that they were all spoofs! The Metro’s April Fool was to Photoshop loads of fake April Fools. Tesco’s 3D food printer, YouTube’s $1,000,000 giveaway and the BBC’s story of how Curiosity rover had joined Twitter, were all very well designed, believable, and well worth a read!

As we the above pranks show, April Fools’ jokes aren’t just limited to a personal level, companies and the media like to play them too, but what about government? Well the US government tried to fool its Twitter followers this year, posting a ‘special video from the president’ – watch it below.

Okay, my post on Monday which informed readers how the Higgs boson has been found  wasn’t true. The Higgs is thought to hold the key (or at least part of it) to help us better understand the origins of the universe. I did also mention in the post how the particle could potentially make time travel viable, and also be the key to ultimate power, enabling us to use nuclear fusion as a power source.

Last month scientists thought they were closer than ever to identifying the Higgs particle, and this is true. However it is still yet to be proved to exist, and it might not be the miracle particle that I made out it could be. Most of my post was made up, as an April Fool – I hope nobody minded.

Google is becoming famous for its April Fools. This year they played several. The most high profile was probably Google Nose, which had the strapline “Smelling is believing.” This April Fool claimed that Google could bring uses the smell of things they were searching for, by “intersecting photons with infrasound waves” they can “temporarily align molecules” to make your screen smell like what you are searching for. Clever stuff – if it were real! 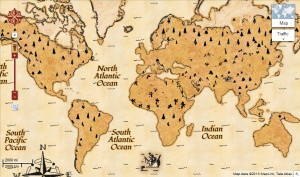 The world, as viewed through Google Treasure Maps

The search giant also created a treasure map version of Google Maps. Google claimed it had found some old treasure maps which once belonged to an infamous pirate Captain Kidd, and it had scanned them and added them to its online mapping service.

Another April Fools joke that Google played was seen in the launch Gmail Blue. Gmail wasn’t blue enough, so they made it all blue, because blue is better! It doesn’t make any sense, but is very comedic – watch the video below for more.

On Monday, when checking Technology Bloggers Analtyics, it turned out that we had 41 visitors from the International Space Station. I took a screenshot, this is no joke! 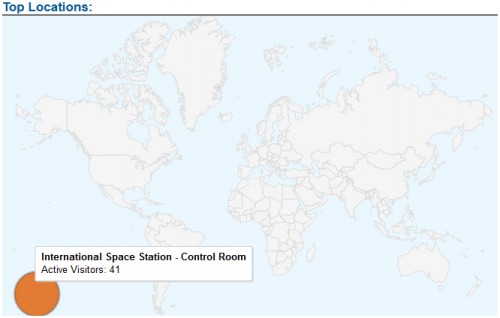 We had 41 visitors from the International Space Station!

Okay, maybe it was a joke, yet another Google April Fool.

These are just a few of Google’s 2013 April Fools jokes.

In third place is Twitter. Twitter’s fool was to trick users into believing that they would soon have to pay for vowels!

It was a half believable story that the social network published on its blog, and it did show innovative ways that people were trying to get around having to pay the five dollar a month fee so you can “use our premium “Twitter” service which also includes vowels” as opposed to having to use the free version: Twttr. Some people substituted o’s (owes) for 0’s (zeroes) whilst in an example in the blogpost, Joan Rivers used the partial/semi vowel ‘y’ to replace all vowels!

That’s right, the competition of YouTube is over, and over the next ten years, the winner will be decided, and on April the 1st 2023, the site will relaunch with just one video on it. The best video. The winner of YouTube’s 8 year video contents!

A pretty good April Fool, but that isn’t why it wins this year. The reason YouTube is number one, is because of the time and effort they put into their April Fool.

The video above shows the initial video YouTube put out for the April Fool, but what many people never saw was the 12 hour live stream they did! That’s right, YouTube got two presenters to stand in front of a camera and read out video after video, videos which have been posted on the site and are ‘up for nomination’ to be the ‘winner’ of the YouTube contest. Click on this link to see the video, and check out this link to read more on the official YouTube blog.

Which was you favourite April Fools’ Day joke this year? Was it one you played, or had played on you? Do you think that smaller April Fools’ like putting salt in the sugar are no longer that significant, when companies like Google, (who own YouTube) Virgin and Twitter are playing jokes on millions – maybe billions?

Google launched an interesting experiment this week, offering free “super” wi-fi connection to the Internet for several schools in Cape Town South Africa. What is interesting about that you might ask? Well they are using the unused frequencies in the broadcast TV spectrum. 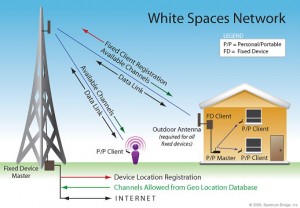 A diagram of a white space network

The TV broadcasting frequency spectrum is currently divided between many channels, but between each channel there is a gap, a frequency space, often known as “white space’, and the hope is that this space can be used to broadcast high speed wireless Internet access. This experimental system is not without it doubters though, TV companies are not keen because they think there might be interference in their picture, so what better than a small experiment to try it out?

We can all imagine how this experiment might revolutionize Internet use though. In the countryside where infrastructure is lacking but TV is visible the companies could offer a service. In the city where cables are all in use they could do the same. One great advantage is that low frequency signals can travel over long distances, so the coverage potential is massive, and they penetrate buildings and other natural barriers much more efficiently than other frequencies currently in use.

Here in the US many telecommunications carriers have been complaining that there is not enough bandwidth for them to keep up with consumer demand, and so the Federal Communications Commission has been trying to free up spectrum space. They approved rules in 2010 about the use of such white spaces and databases have been set up to monitor spectrum use to see how it can be improved. Google are one of the leaders in this database organization too, as this article explains.

Experiments are being conducted here too, with this article describing how the system is being used in a small North Carolina town, and results reported in the UK claim that the system can deliver 16 megabits per second over 10KM (see Christopher’s comments on this related article for an explanation of what that means), but this is a delivery similar to what we know as 4G.

Potentially great improvements in coverage might be just round the corner through a more efficient use of an already existing infrastructure. 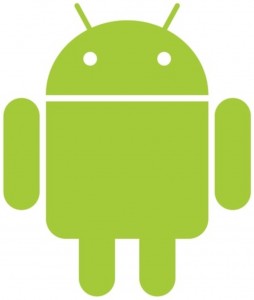 Never mind your smartphone or tablet; what about your fridge, or your oven?

Soon, Google Inc. is hoping to be controlling devices in your home from televisions to rice cookers.

There’s already Android-enabled TVs, with the Android mini 4.0 that turns your television into a smart-TV. You can get hold of these from places like Appliances Direct. Just with the dongle, you can connect to the internet via your Xbox or Wii U, or even hook it up with your tablet or smart-phone. It’s easy now to watch YouTube or browse the internet in the comfort of your own front room and thanks to Wi-Fi there’s no fiddling about with cables and wires.

The main hook with smart-TV is the apps available on your television, including the capabilities to make Skype calls on the big screen.

So what exactly is in store for your kitchen?

Appliances like fridge freezers could be operated by Google in the near future. Take Samsung’s T9000 refrigerator, which will be available to purchase shortly. It’s kitted out in full for the modern home, with a 10 inch Wi-Fi touchscreen and the option to download such kitchen-friendly apps as recipe-maker Epicurous or note-taking Evernote.

And what about a rice cooker? Able to determine the type of rice and exactly what cooking instructions to follow, gear like this will be able to keep track of your shopping habits, keep tabs on your favourite brands for research purposes and suggest new brands to try.

Soon you can have a kitchen full of appliances sending information to each other. With the Andriod OS in tow, products like LG’s ThinQ refrigerator can connect to the LG SmartOven, telling it when to start preheating and to what level depending on your choice of dinner that evening.

Most smart appliances are set to run by your instructions via text, too. Put your dinner in the oven when you set off for work and a quick text on your way home turns the oven on so you’re greeted with a cooked meal when you walk through the door.

With microwaves, washing machines, ovens, fridges and even coffee machines and getting smarter, how long will it be before your home is full intelligent stuff? The kitchen of the future is apparently closer than you’d think.