In this the second post of my series about environmental conservation issues, I look at technology whose use could contribute to lessening the planet’s dependency on fossil fuels.

One of the major concerns for the environmental lobby is, and has for a long time been, the environmental cost of transport systems. As we know the vast majority of goods and people use petrol as a propellant, produce lots of pollutants and don’t do the planet any good whatsoever.

There are various option however that are readily available today for cutting down on petrol use, and in this post I would like to introduce a few.

The internal combustion engine is a simple machine, an explosion in a chamber forces a piston out and that is attached to a rod that drives a wheel (or 4 in most cases), but it is a simple operation to exchange the explosion for another form of inertia. We can in fact run a standard vehicle on air, as these plans show. 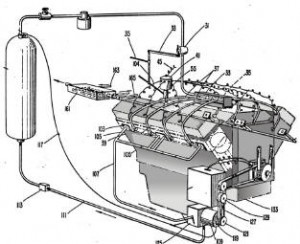 Plans for an Air Engine

In 2010 for example the Royal Melbourne Institute of Technology unveiled a prototype of a motorbike powered solely by compressed air. The project was created by lecturer Simon Curlis and carried out by a team of students. Curlis’s goal was to produce an emissions free motorbike capable of travelling at more than 100 miles per hour, a feat that went on to achieve on a dried up lake in Australia. Take a look at this report for further details.

The motorbike is a standard Suzuki GP 100 frame fitted with a rotary engine and a couple of tanks of compressed air stored under the bodywork. A wonderful idea, but you just have to bear in mind that compressed air is highly explosive and doesn’t produce as much power as petrol, but is of course emissions free!

But we can address one of these problems as well as the cold hands in winter issue by investing in an AIR car.  In order to resolve the problem of having to store huge quantities of air the AIR car has a small petrol driven compressor that refills the tanks when they are low. The fuel required to maintain this system is incomparable, with the owners claiming at least 100 Km to two litres of fuel, with the advantage that you don’t need to use any petrol at all in town, you just run the compressors during out of town driving.

The development company that produce the cars above have signed a deal with TATA, and hope to produce production models soon, and they have several different models today including a small urban transport bus. Several US manufacturers are also following suit.

If a life on the ocean waves is more your scene take a look at the largest solar powered ship, currently sailing round the world. The 60 ton Planet Solar is an impressive looking catamaran, and can sail for 3 days without even seeing the sun due to its enormous production capacity and batteries. You can check it out via this video on YouTube.

The ship above may look like an expensive toy for boys, (as does this fuel free solar powered aeroplane), but solar powered sails do exist and are in use on commercial freighters. A company called Eco Marine Power produces rigid sails that not only harness the wind on large cargo ships but also produce electricity as they are in effect giant solar panel sails. Click here for a photo and description of their research. Ironically enough they are best suited to oil tankers, as they don’t have the problem of cranes for cargo that get in the way.

And talking about sailing ships another company called Sky Sails produces a large Kite that you attach to the front of your ship to harness the wind. On a 25000 ton ship the 320 square metre kite lowers fuel consumption by about 30%. Hardly new technology though, Sir Francis Drake knew how to do it!

Shipping may not strike you as particularly relevant to this argument but you might be surprised. Shipping is the main cause of sulphur emission into the atmosphere, and the problem is political in nature. At sea you can burn anything you want and so the shipping companies buy and burn something called heavy or bunker fuel, in short the dregs of the petroleum refining industry. Extremely polluting and damaging to the health. Had you ever noticed how much smoke a ship makes when it is steaming into the distance? 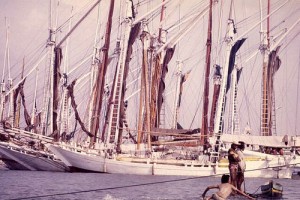 Schooners are still in use across South East Asia

On a personal note I would just like to add that sailing ships are still used across South East Asia to transport goods. I saw lines of men and women carrying sacks of grain on their backs up planks on to wooden ships with my own eyes no more than 10 years ago. The photo above gives you an idea, although I did not take it. These wooden schooners are sailed to larger ports where they are unloaded by hand and their goods (sacks of foodstuffs) are left in piles that are then craned onto big ships and sent to Europe, unfortunately not by sail and producing a lot of smoke!

I haven’t addressed the related issue of bio fuels for use in transport in this article but will do so in a later post. Next week I will take a look at alternative forms of electricity production and new technological developments on that front.