We all want a little more power. Smartphone manufacturers have catered to this desire, as they’ve continually pumped out increasingly powerful devices.

This year we’re seeing many quad-core devices with 1.5GHz processors, powered by 4G LTE networks, and with vibrant high-resolution displays. Yet these high-powered devices are about to hit a wall if we don’t see some critical changes in battery efficiency. Without adequate battery life, even the most powerful smartphone is useless.

Thankfully, there are a few reasons to believe that we’ll see appropriate improvements in the near future. Here are three reasons why we will see smartphone battery life improve in the coming months and years. It will be a great boon to consumers, who will be able to use their phones heavily for longer.

Earlier this year, Motorola made something of a bold move. In a world of thinning smartphones, it actually released, and heavily marketed, a smartphone that is considerably thicker than many of its other models.

This only worked, however, because with the increased thickness came greater battery life. By most reasonable tests, the Droid RAZR MAXX lasts nearly twice as long on a single battery charge than most of its competitors.

The rationale behind this marketing campaign was simple. People love their smartphones, but get frustrated when they can’t last on a single charge throughout a day. Again, a powerless smartphone is a useless smartphone.

You can stuff all the features in the world under the hood of a phone, but if people need to constantly recharge in order to use those features there’s not a lot to be gained. Improved battery life will simply become a necessity that manufacturers cannot ignore.

The way we consume energy is always changing. The recent technology revolution will change it yet again. Most of our modern computing devices employ DC power, but our wall sockets deliver AC power. That leads to a few inefficiencies, since the difference requires a converter of sorts, whether that’s in the device or in the power source itself. We might see that change in short order.

As Technology Review notes, there is a growing demand for DC current source. It is possible that we could see power companies start to deliver DC power to our outlets in the next few decades, which should make the whole charging and powering process more efficient. The lack of conversion could make that big a difference.

Yet, given our consume-driven culture, it probably won’t make as much of a difference as my next point.

It seems that whatever Apple does, other companies copy. Apple has long been an iconic force in technology, and their iPad and iPhone empire has helped solidify its spot at the top.

What they do with the iPhone 5 could again change the smartphone industry. As GigaOM’s Kevin Tofel notes, Apple could focus on battery life with the new iPhone, rather than creating another thinner model. He cites the increased battery capacity of the new iPad, which seems reasonable enough. 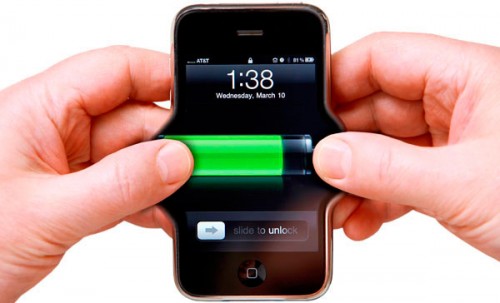 If Apple does indeed create a thicker smartphone that focuses on battery life, others will be pressed to follow suit. Remember, Apple essentially tells consumers what they want. Perhaps they wanted it previously – and plenty of customers have demanded better battery life from smartphones – but Apple does have the definitive word.

It’s hard to explain, but it’s clearly the case based on how the smartphone industry has developed. If Apple goes for battery life, we can expect others to jump on the bandwagon too.

Battery life has become a pressing issue for the future of smartphones. Manufacturers have created devices that are as powerful as full-sized computers of recent memory. Now they need adequate power for them.

Since a powerless smartphone is a useless smartphone, expect companies to jump on the better-battery bandwagon soon enough. Apple could get things kick-started this year. Things will likely develop rapidly from there.

12 thoughts on “Are smartphone battery life improvements on the way?”