The Institute of Mechanic Engineers says that turning air into liquid may provide a solution for energy storage. At present most energy is stored in batteries, but battery production and disposal is an extremely messy and polluting affair, and so experiments are underway to look into this alternative.

One of the problems particularly with renewable energy sources is that energy is produced at times when it is not needed. The system cannot just be turned on or off, so this excess energy must be stored. Scientists believe that with improvements the liquid energy solution could be 70% efficient, less than batteries but at a much lighter cost to the environment.

To give you an idea of how the process works, it follows a number of stages:

“Wrong-time electricity” is used to take in air, remove the CO2 and water vapour, which would otherwise freeze solid.

The remaining air, mostly nitrogen, is chilled to -190C (-310F) and turns to liquid – this provides a compact storage medium that can later draw energy in the form of heat from the environment.

The liquid air is held in a giant vacuum flask until it is needed.

When demand for power rises, the liquid is warmed to ambient temperature. As it vaporizes, the expanding gas drives a turbine to produce electricity – no combustion is involved.

One particularly interesting thing about this development is that it comes out of a garage in England. 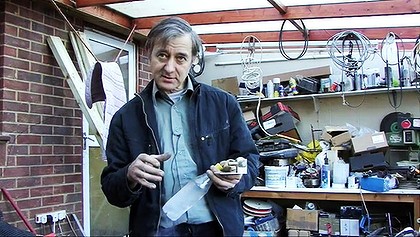 Peter Dearman made the discovery while looking for a way to power his car using air. I have written about these types of experiments before in my Health of the Planet series. Take a look at this video on Youtube to see Dearman at work. Real Chitty Chitty Bang Bang stuff.

The BBC also has an article in its Science and Environment section that you can read here.

One conclusion to draw is that world changing technological innovation has to start somewhere, and it is not always in a sterile lab. Sometimes it is in a garage behind a house in Hertfordshire.

5 thoughts on “A Possible Breakthrough in Energy Storage?”