Just when we thought communications can’t get better than this, there are developers out there who outperform what is already there on the table. VOIP has been one of the prime focuses on development, and with the sudden burst in Android market, more and more developers are now pouring into creating state of the art applications that dramatically increase chatting, calling and messaging services. Recently, making its mark in this field has been AireTalk – an application by PingShow which attempts to provide these features on Android and iOS.

Nothing comes for free in this world, although the prices might not be visible or charged in a different sense which is neither direct nor hidden/masked. Being able to make free calls, AireTalk suggests that the calls will be made using the internet connection to any other AireTalk user and the caller doesn’t have to bear the charges of the “carrier” network.

Although this app might seem very similar to all other apps in this genre, AireTalk comes with an interesting feature which is inspired from Radio Stations and Yahoo’s famous chat room concept. This feature head is termed as “Studio”. This is like radio stations, which has different languages as “Stations”. Users can select a particular Language station – just like chat rooms and enter, also invite their friends and chat in that language. A very innovative idea which still requires more polishing, all in all this can be used as a good language tutor guide and practice zone. 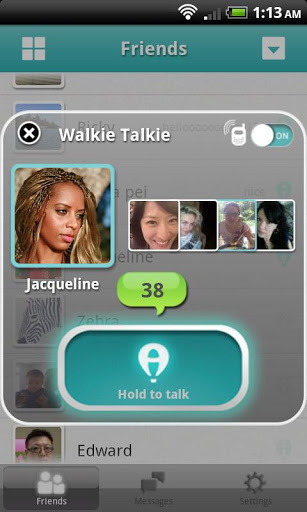 Some most common VOIP features are added by default. What is interesting to note in AireTalk is its Walkie Talkie feature. Just as the name suggest this feature can be most useful in camping trips and adventure tours where you would want a quick chat or message to be delivered. Since internet services are at use here, this app like all others doesn’t have restrictions on international calling as well.

Since its initial launch, Android has evolved at lot both in sense of performance and user experience. Although, many apps on the market still need to upgrade themselves a lot to avail the maximum that Android has to offer its developers. AireTalk has still to go a long way in becoming seamless and intuitive in sense of user experience. The options bar is responsive, while both the landscape and portrait views show the same layout; it can be improvised further to enhance visual effects and transitions between screens.

Facebook login might have become a bit old fashioned nowadays; nonetheless it has become an essential part in increasing effective user experience and ease of customization. This app enables users to login using Facebook, this way users cannot just connect with AireTalk friends but also with their Facebook friends thus accessing a wider range of people set. If you have an inquisitive mind towards what other upcoming apps have to offer to their users, you can try AireTalk.