Google’s head of Google webspam, Matt Cutts (a Google employee and guru on everything search) is always telling webmasters not to obsess too much about PageRank. I would agree, it is not always that accurate, (give or take 1 rank either way) probably because it is not publicly updated that frequently – it is always updating, results are just not released regularly to the public.

At the end of the day, PageRank is just a lovely green (or maybe a not so lovely white) bar that a page is given. It doesn’t necessarily correlate to how a site is performing in the SERPs, and doesn’t guarantee good rankings.

That said, I am pleased for the blog, as our green increased a little, and white retreated back, as Technology Bloggers jumped from a 3 to a 4 🙂

Google say on their own website that PageRank represents:

“Google’s view of the importance of a webpage”

That is a direct quote from Google.

So basically, pages ranked 0/1 (in Google’s view) aren’t that special, there are loads out there, nothing makes them stand out. Pages with a PageRank 2 are more important, they are special, but not that special. The further up the scale you go, the more value your page is worth. You might have a high value homepage, but low internal pages, that is to be expected, as a lot of the algorithm is based on links.

One would assume that if you have serious traffic, you should be right at the top of the PageRank scale, as people find your page very useful, and therefore Google must think your page is important.

Twitter gets just 220,000,000 visitors a year (0.22 billion). So why is it then that in the recent PageRank update, Google ranked its main homepage (Google.com) 9/10, it ranked Facebook 9/10, but it ranked Twitter 10/10. Twitter is one of around 10 sites on the net with a PageRank 10. Twitter is only the 8th most globally visited site on the web, whereas giants Google and Facebook are clear leaders.

The UN and the The U.S. Government’s Official Web Portal are two of the other few sites with a PageRank 10 on the web. Updates over the last year have seen a lot of PageRank 10’s loose their rankings. Why? 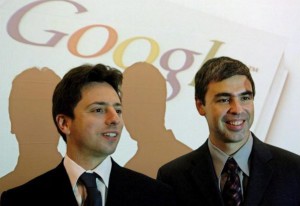 Larry Page and Sergey Brin - the founders of Google.

Is the web getting less ‘important’? What are your thoughts on this? I find it really interesting how Larry Page‘s (co-founder of Google) algorithm, which is used by Google, ranks Google less than top.