EDITOR NOTE: This is Jonny’s 100th post From his humble beginnings writing about elective amputation, Jonny has taken Technology Bloggers by storm! Jonny started as a contributor, soon after earning himself author status and he has recently been awarded editor status. Congratulations and thank you from me and the rest of the community Jonny, you deserve it. Here is to the next 100! 😉 – note by Christopher

Oh I am rather tired this morning, like many others. I need to have my daily coffee. Sometimes I imagine a world where my surroundings understand me, my needs and wishes. I had a teas-maid once, that was the closest I ever came to automated good life, but times have moved on.

Face recognition software offers the dream of a newly serviced life. And the dream is here already, well not here exactly but in South Africa.

Yes coffee producer Dowe Egberts have built a coffee machine that uses a camera and software that can read your face. When it sees a person yawn it automatically produces a free cup of coffee for them. Check out this video on Youtube. Or get a free coffee by yawning next time you pass through the O.R. Tambo International Airport.

This is of course all done for publicity, but it does open up a train of thought that leads into science fiction.

This is not my first post about face recognition software. I wrote one earlier this year about Verizon’s project to fit it to TV top cable boxes, and the year before about mobile recognition apps, and since then there have been a few developments that I would like readers to note.

Researchers have been working on identifying individual animals using the same software. Cameras are often used to count wildlife in studies, but the problem often arises of determining which animals may have been counted twice. This problem could be overcome if the software could recognize the individual beasts, and scientists at Leipzig zoo have been working on such a project. 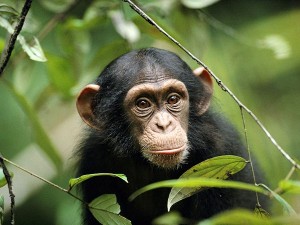 Do you know this one?

They have 24 chimpanzees to work with, and have designed a system that recognizes individual animals with up to 83% accuracy. The difficulty is getting good photos in the wild though, and in dim light the accuracy quickly drops, so the researchers have been designing new parameters to improve broader recognition.

Check out the article here to learn more.

The change would mean that every user, of a population of a billion, whose face is visible in his or her profile photo would be included in the database. To sidestep the new feature, users will have to avoid showing their faces in their profile photos and delete any previous profile photos in which their faces are visible.

Facebook have however had problems implementing their recognition policies in Europe, and in fact the system was turned off in August of last year, but the new regulations seem to be another attempt at opening the door. See this article for a review of the arguments.

Regardless of whether you as an individual take these precaution, millions will not, and the database will grow massively overnight. And that will be worth a lot of money to somebody somewhere down the line, and have implications for all of us.

Blogs all across the world are talking about human rights today. For the fourth year in a row I am taking part in Blog Action Day.

This year the topic is human rights.

I am going to share with you might thoughts on the relationship between the Internet and human rights.

Imagine what it would be like if every day, a cloaked figure followed you around, observing your every action and taking notes. It would be a bit creepy wouldn’t it, not to mention the privacy issues.

Back in 2011, I wrote a post asking whether everyone should be entitled to use the Internet and whether in fact it should be a human right. Founder of Facebook Mark Zuckerberg believes that it should be; make your own decision as to whether this is only because he wants more business for his site.

So, imagine what it would be like with Mark Zuckerberg following you around all day, taking notes on what you do, invading your privacy… hold on, if you are on Facebook, he kind of does.

See how I linked that. 😉

I am no stranger to complaining about Facebook, but it isn’t the only culprit, Google is also a huge threat to online privacy. It stores all information it collects about you for at least 18 months. Why? In the words of Hungry Beast, because “Google wants to know who you are, where you are and what you like, so it can target ads at you.” Check out Hungry Beast’s video to scare yourself.

So to get to the point, I don’t believe access to the Internet need be a human right, (not yet anyway) however I do believe that the right to privacy online should be.

“No one shall be subjected to arbitrary interference with his privacy, family, home or correspondence, nor to attacks upon his honour and reputation. Everyone has the right to the protection of the law against such interference or attacks.”

Why does this not cover our online lives too? Should Google, Amazon, Facebook, Yahoo and Apple (and others) be allowed to monitor us so much?

I shall keep this short and sweet and leave you with those thoughts. 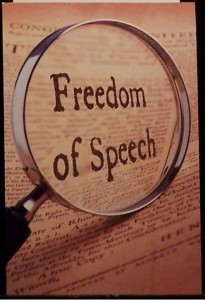 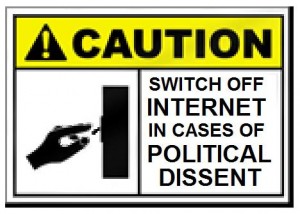