I have recently upgraded to Windows 7, which is why I kind of wasn’t that pleased when Microsoft announced (early last week) that it was getting set to launch its next operating system, Windows 8, some time next year – probably around April.

At the Build developers’ conference in California, Microsoft unveiled the new operating system, (no doubt still in early beta stages) and gave us a sneak peak at to what is in store in the next version of Windows.

They stated that the core foundation of Windows 8 was Windows 7, but better! To quote Steven Sinofsky exactly, he said:

…everything that was great about windows 7, well we took that and we made it even better in Windowws 8!

Despite saying this, this version of Windows OS looks like it has had a dramatic overall.

Windows is currently under more pressure than ever before in its long, domineering history. In the past the cheap, affordable and compatible OS, always used to be Microsoft’s Windows. Now however Apple are putting increasing pressure on Windows, along with Google’s new attempt to bring down the giant of Windows in the form of Chrome OS.

Hence why Windows 8 seems to be dramatically different to all previous versions of Windows.

So what is going to be different? Well for starters, for the first time ever, a Windows OS will be compatible with low power ARM-designed processors.

Also, from the glimpses and comments that Microsoft have currently given us/made, it looks like Microsoft are attempting to make Windows a more ‘family friendly’ operating system, in that it’s more of a media based OS. This is probably done to try and steer away from the classical view of Windows in that it is an operating system designed primarily for spreadsheets, documents and other work/business related tasks. 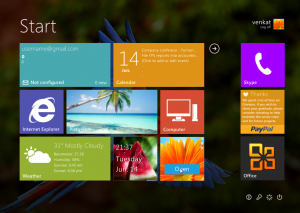 In addition to this, Windows 8 will support touchscreen devices, possible Microsoft’s way of saying “get ready for Windows Tablet guys!” who knows.

Microsoft knows that it has to pull something pretty special out of the bag this time, or it could seriously loose its foot in the computing market, not only due to the increased competition, but also because users are slowly moving away from desktops and laptops, and towards smart phones and tablets.

That’s pretty much all the information I have at the moment, however no doubt we will have loads of updates on Technology Bloggers for you, as soon as we find out more about this new OS 🙂

What do you think and hope for with Windows 8? Do you speculate that it will be another Vista – i.e. slow and laggy, incompatible, riddle with bugs, and hated by many tech gurus, or will it be like Vista to 7, a breath of fresh air?