As Oracle OpenWorld draws to a close for 2012, the announcements filtering out from the event included headline-catching advancements from the world of business software.

However, the attendees’ attention was divided by the inevitable comparison with last years’ conference. That event unfortunately coincided with the death of Steve Jobs, the news spread during the closing speech by Oracle CEO Larry Ellison, a close friend of Jobs’, who was comparing the similarities between Oracle and Apple.

Many reports continued after the 2012 OpenWorld to compare the difficulties both companies have faced throughout the year and the way each of the tech giants are led. Both companies combine hardware and software but Apple are viewed as innovators whereas Oracle is only just catching up with the crowd, particularly in areas previously dismissed by Ellison.

OpenWorld 2012 was generally considered a success by the IT sector even if a number of observers thought that it lacked innovation. The technologies announced highlighted a number of ways the roles within oracle jobs will be evolving as the firm advances with virtualisation and cloud computing.

One of the announcements during the conference focused on the new Exadata X3 Database In-Memory Machine. The role of this product is to compete against SAP and permit consumers to move their IT jobs to the internet from data centres. 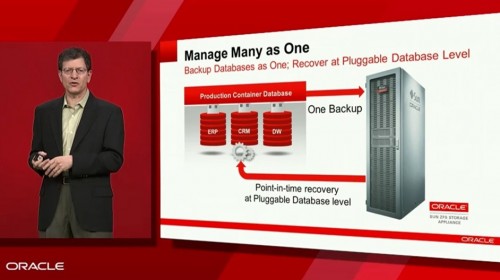 “You can access all of these services across the network,” Ellison said. “It took a long time to build a complete suite of cloud applications and the all-important platform, which we call Fusion middleware… We have a huge advantage in platform solutions in the cloud because we are the number one platform company in the world.”

Ellison’s own desires may have overshadowed the outcome of the conference.  In an interview with CNBC, a financial news channel, taken just before Oracle OpenWorld launched for this year, Ellison covered a number of topics ranging from Oracle to his Hawaiian island Lanai.

If the success of Oracle was ever in doubt, a browse through Ellison’s ambitions may clear the issue up.  With a current fortune of $41 billion, he recently bought 98% of Lanai, and also hopes to one day own his favourite NBA team; the Los Angeles Lakers. Previously Ellison bid for the Golden State Warriors and mentions liking the Chicago Bulls too.

Oracle Openworld 2012 proved to be a successful conference for consumers and businesses alike. The countdown begins for what Oracle can come up with for Openworld 2013.