Protection
Having use the Impact Shield screen protector for several years now, I’ve got a pretty good knowledge of the protection it gives. Whilst the screen protector itself does pick up scratches (which do very slowly fade with time) Tech21’s screen protector does a fantastic job of protecting the phone’s screen.

Over the course of 2 years, I replaced my screen protector twice, because it just collected too many scratches, however every time I pealed it off, the phone screen itself was fine. This newer version offers the same protection, just for the S6. The video below is made by Tech21 – it’s a drop test of a ball-bearing from six foot. 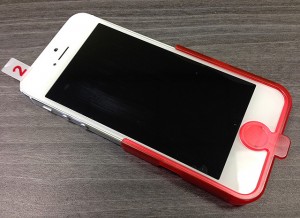 Before you apply the screen protector you need to remove any dust from the screen. The microfibre cloth that comes in the packet is pretty bad, and just seemed to spread dust, rather than remove it. I ended up using a glasses cloth to give the screen a proper clean.

Once all the dust is off, you remove one layer of the screen protector, stick it to the phone and then use the cardboard provided (also not very useful) to remove any bubbles, before removing the upper layer. Then you’re done; screen protector applied!

There is no noticeable difference in the quality of the display once the screen protector has been applied. Some screen protectors make the screen look fuzzy or distorted, however Tech21’s does not. I have noticed that when using the screen with the protector applied, there is slightly more friction between my figure and the phone, meaning it doesn’t glide as smoothly across as it would otherwise. You do get used to it however.

The Impact Shield screen protector currently costs £25, which is to the higher end of the price spectrum.

The Impact Shield does its job well: protects the screen without compromising on clarity or usability. The level of protection it provides is great, but I’m not sure the regular user would really need it very often. The self-heal feature is good to have, but it doesn’t work quite as well as you might hope or expect.

Ultimately taking into account the competition and Impact Shield’s relative price and protection, I’m going to rate it a generous 4 stars. 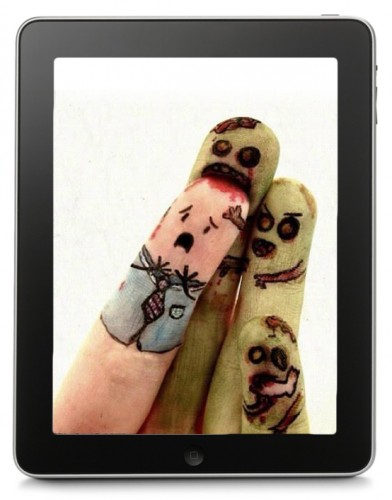 Over the last couple of weeks I have flown from the USA to Britain, then to Italy, and back finally to the USA. I flew on some lovely new Airbus aircraft, but had a constantly recurring problem with the on-board entertainment systems.

The problem is that in the seat above me there is a fantastic touchscreen entertainments system, but my fingers do not work. My son who was sitting next to me has good fingers, he touches the volume section and can turn the sound up or down, but I cannot because the slider does not seem to recognize my body.

So it must be my screen I think, my son leans over and it works perfectly well for him. We swap places, now mine works for him but I still cannot change the volume, this time on a different machine.

It must be me I conclude, but why? Long ago I gave up using anything touchy for this reason. I try licking my hands, warming them up, cleaning the screen but I do not make any progress. So I started looking around the web for some answers to find that I am not the only one, hurrah. There is even a recognized name for the problem in some fields, Zombie Finger!

Touch screens operate in many different ways. At Walker Mobile you can download a free PDF that explains how the different technologies work, but the vast majority of application that we know use one of two approaches. They can be described as Resistive Touch and Projective Capacitance.

Resistive touch is old school analogue. Two surfaces are together, typically one of glass with a thin film over it. You push down on the film and it makes a circuit using a grid of electrical conductors. The system is cheap but being mechanical liable to damage and wear, and it is thick.

Projective Capacitance has no moving parts however, and some of its advantages mean that it is rapidly taking over the market. It is a system that works on capacitance, which is the thing that gives you a shock when you walk over a synthetic carpet and then touch the brass door handle in the hotel that you are staying in. 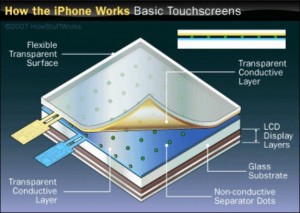 Again there are two layers, both charged but to a different extent. When you touch the screen some of the charge is released into your finger, and this tiny change can be measured. And here lies a variable, because the nail will not carry a charge, gloves stop the action and so I wonder if even the state of the skin at the end of the fingers might effect usability. Do I type too much? No charge transfer means no volume.

For a fuller explanation of these 2 competing systems see this article, it is short but extremely informative. I would just like to know if anyone else has issues with touch screens, and if so if they have been able to address the issue in some way. As technology advances this interface is becoming the norm, and we wouldn’t want to leave people with particular skin types behind now, would we? 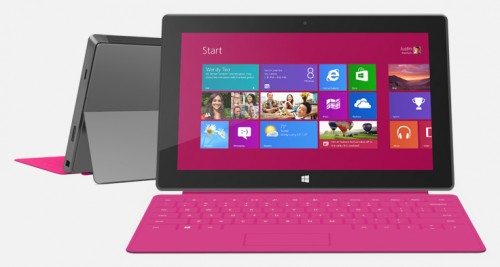 Windows Surface is one of the new hybrid tablets that are emerging, blending touch tablet and traditional laptop functionality into one portable package. The main selling point is the keyboard, which can be effortlessly connected to Windows Surface, allowing for speedy word processing that is normally difficult on touch tablets. Being priced at the same level as the iPad retina display (£479 including keyboard), it’s clear to see who Microsoft have in their crosshairs.

With a 10.6-inch screen, the Surface is perfect for word processing, watching video and doing day to day tasks while remaining portable. It’s incredibly slim (9.3mm), being 1mm slimmer than the iPad retina display. Weighing in at 678g, this device is slightly heavier than other tablets and may cause discomfort when held in the hands for extended periods of time. That being said, there is a nifty kickstand which makes viewing Microsoft Surface extremely convenient.

With many tablet manufacturers pushing screen resolution to the max, people were surprised to see that the resolution was somewhat lacking. With only 148ppi (pixels per inch) things definitely lack clarity when compared with the likes of the iPad 4 or Nexus 10.

The biggest problem with Microsoft Surface is its distinct lack of apps. The marketplace is extremely barren when compared to the likes of the Apple of Android stores. Basic things like Facebook and Twitter don’t have their own apps and can only be accessed through ‘People Hub’. You should only rush to sell your iPad when this problem gets sorted.

Microsoft Surface is powered by a Tegra 3 chip, a highly praised processor that has powered the likes of the HTC One X+. The performance of the Surface is stable for the most part, however there have been many reports of long loading times for apps launching and lag while browsing. Not the most impressive thing about the Surface. However, it does do the job.

One of the best features of Microsoft’s Surface is its wealth of connectivity options, some of the best seen on a touch tablet. The Surface comes with a full sized USB port, Micro SD slot and HD video out. The only disappointment is the lack of mobile internet connectivity for the Surface, giving it limited capabilities when not connected to Wi-Fi.

This is a very promising product from Microsoft, however it still has many problems that need sorting out, in particular the lack of applications. I don’t think it is time to trade in/sell your stuff online just yet to fund the purchase, until Windows fix some of the problems with Surface.