I have just read a Special Issue of the Journal of Responsible Innovation all about the role of luck in science that raises some interesting and entertaining questions about responsibility. One of the events that is often discussed in the field of ‘science and luck’ (oh yes, there is a field), is that of Alexander Flemming’s discovery of penicillin.

Fleming was lucky enough to be able to take a holiday from his work in St Mary’s Hospital in 1928, and rushed out of the lab leaving some of his dishes unwashed that he had been using to do some experiments with a bacteria that causes boils, sore throats and abscesses.

When he returned, refreshed, and started to tidy up, he noticed that one of the dishes had some mold growing on it, and around the mold was clear. No bacteria! Maybe the mold was producing something that was able to kill the bacteria!

Fleming called it mold juice, and he discovered that it worked against lots of bacteria, but it was unstable and difficult to work with. It was only really of interest because it could be used to isolate different forms of bacteria, so those that were sensitive to the mold juice substance (something that we call penicillin) from those that were not.

It could have all stopped there, but a team in Oxford discovered that if they gave the substance to mice it seemed to work against streptococci, so they tried it on a person, a police officer with a badly infected cut. It seemed to work, but they did not have enough material to continue the treatment, and unfortunately the patient died after they had to stop treatment.

11 years had passed by this point, but times had changed with the Second World War well underway. The Brits were busy with the war effort, so the researchers contacted their colleagues in the USA to see if they would be interested in continuing the work. They took it on and started to look for more efficient production methods, and more productive strains to develop.

Well, what would you know, they found a moldy cantaloupe in a Peoria fruit market that seemed to work fantastically.

As the US joined the war there was a push to scale up production, and within 3 years the pharmaceutical companies had produced enough (and tried it out enough on injured soldiers) to supply the allied armies with enough to treat all the seriously wounded troops from D-Day.

Fleming was given the Nobel Prize, and today we all know his name. But we might say that he was a lucky boy. His discovery was at least partially beyond his control after all. If he had cleaned up properly before his holiday the world might be a very different place today.

A couple of weeks ago I attended the American Association for the Advancement of Science Conference in Chicago. It was my first conference of that size, and the first time I have gone as a journalist, and not a participant.

It is cold in Chicago in February, the lake was frozen for as far as you could see, with sheets that had broken off at some point rising out of the flat desert landscape on the water. It looked a bit like there had been a landslide or earthquake, with the plates sliding above each other.

It has been a harsh winter in general here, and Chicago had experienced some of the coldest temperatures in decades, I found this photo below on the Huffington Post site. 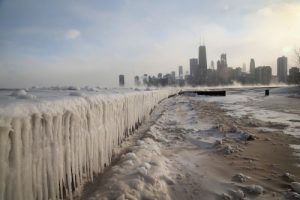 In the background we see the Chicago skyline, and the conference was held in one of the giant hotels that looks out over the lake. There are many hotels on the shorefront, and one thing that surprised me is that they are all linked together by a series of underground tunnels.

Tunnels is a bit of a misrepresentation really, they are underground streets, with shops and bars and sign posts, so that on a cold winter’s day guests do not have to step outside. The conference made use of several different hotels and restaurants, and some people told me that although attending different venues they had not in fact been outside, and had not put on a jacket since their arrival.

The system is known as the pedway, see an explanation here, it covers 40 square blocks. The photo below gives an idea of what parts of it look like. Apparently they are not uncommon in North American cities, in Montreal it is known as the underground city. 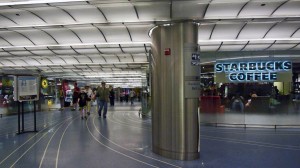 As I said above the conference was a giant affair as the program demonstrates. I wanted to see a session on responsible innovation and to take part in the launch of the Journal for Responsible Innovation (I am on the Editorial Board and the Bassetti Foundation sponsored the event) but at any one moment there were dozens of panels in session and associated events.

The journal launch clashed with a talk given by Alan Alda the American actor (most famous for his part in MASH). Alda now runs The Alan Alda Center for Communicating Science where he addresses issues and trains people in the art of science communication.

As I said I couldn’t attend but many of my colleagues told me that his talk was great.

I attended a session called Responsible Innovation in a Global Context early on Saturday morning. It was a great session and I learned a lot. Did you know for example that all research that is conducted involving water has to use an internationally accredited water? Yes it is purified water that then has certain amounts of certain minerals added. This means that scientists doing research in Brazil are using identical water to those conducting research in Italy, or Australia or anywhere else for that matter.

Great we might think, but using this type of water also makes some of the research useless. If bacteria lives in a river it interacts with its own type of water, plants life etc and reacts in particular ways. In the official water these reactions are not seen, so the research does not replicate a real life situation, so the results are different to the real experience.

But in order to get funding and to have their research accredited only one type of water is allowed. So money is spent on research that does not represent reality because “that is what the funding bodies want”. A ridiculous situation it would seem.

The influence of politics in research was also addressed from a Brazilian perspective, but one that can be applied throughout the world. When research and innovation is so tied to politics and touted as the saviour of the economic decline or development of a country it sometimes takes on a nationalist hue. This leads to questions about by whom, for whom and with which goals, that involves ethics and responsibility.

One of the most interesting developments though involves collaborations between the hard and social sciences. In several areas social scientists have been placed within science labs to act as a forum that allows scientists to talk about and understand the ethical dilemmas that they face while carrying out their work.

Much of the stuff I write about is related to the problem of scientific development and dual uses, unforeseen effects and changes they bring about in society, and having a social scientist, philosopher or ethicist in the lab seems to open up debate and even effect scientific outcomes. It might even seem to improve productivity is some ways!

As an aside I should add that attending a conference as a journalist has many advantages. As a participant you want people to listen to you, you have to pay to attend and publicize your event. But as a journalist everyone wants to talk to you so that you will write about them.

At every chance organizations try to engage you. There are free cooked breakfasts offered by national research councils, aperitifs form journals and unions, awards, free books and cd’s more alcohol, cakes and coffee, nights out with transport laid on, more food and more alcohol. Many of my colleagues were jealous, they had to pay for everything.

Thousands of people attended the conference and a lot of networking took place. I get the impression that this is really what these large conferences are all about. I am pleased to report that science bloggers (such as myself) are taken seriously and accepted as serious journalists, and there were many of us sitting alongside Reuters and the New York Times. All Kudos to the AAAS for that.

I stayed at the Palmer house hotel in Chicago, a splendid structure and once the largest hotel in the world. Worth a stay or even just a look if you are passing through. Other famous guests include Mark Twain, Oscar Wilde, Charles dickens and the scarecrow from the Wizard of Oz, so I won’t be asking for a plaque to be erected about my visit.

The BBC has recently been reporting that memories can be carried from one generation to another through genes. We always knew that certain characteristics were passed on, but we had never known if or how memories were transferable.

Well it seems that they are, but what might this actually mean?

On 1 December Nature Neuroscience published a report that you can read the abstract of here although it is extremely technical.

In lay terms the research aimed at understanding how experiential and behavioural traits could be passed on. In the case under discussion they used mice to see if traumatic stress experiences could be seen to influence the next generation.

The experiment went something like this. A mouse is put into an environment that has a particular smell, cherry blossom for example. In that environment and accompanied by the smell the mouse is traumatized in order to produce stress.

The post traumatised mice then produce offspring, and they themselves produce a new generation. The grandchild mouse is exposed to the smell (cherry blossom) and their activity is monitored to see if they behave differently as a reaction to that particular smell, and they do. 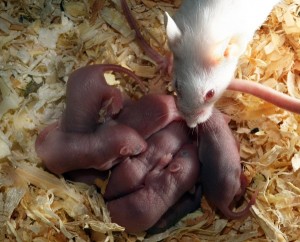 Passing it all on

The mice were “extremely sensitive” to cherry blossom and would avoid the scent, despite never having experienced it in their lives, and changes in brain structure were also found related to the smell.

The report concluded that “the experiences of a parent, even before conceiving, markedly influence both structure and function in the nervous system of subsequent generations”.

I wonder if associations are just negative? My children love the smell of Indian food, my father was raised in India and also loved the food, but he died many years ago and my children never knew him. Do they like the smell because my dad passed a liking of the food through my genes to them?

This is a simple example to question, but what are the implications for society after war? If we think about the Vietnam conflict, or more recently Afghanistan or Iraq for our our US veterans, what have they passed on to their children? Could the post war generation be suffering from a form of Post Traumatic Stress disorder thanks to their parents’ experiences?

And could the memory be more complete in a human brain, possibly being better functioning that that of a mouse?

And think about the implications for the theory of evolution.