Before you read any further you should know that as a writer I have been offered a small fee to produce this article, and will receive a (very small) fee for every person in the UK who watches the video – for a limited time. That said, this in no way affects my objectivity or impartiality, and I endeavour to make this article as interesting as any other on the blog. Our policy as a blog is to only accept paid editorials which are of interest to the writer, and which we believe will be of interest to our readers. Funds raised help us to maintain and improve the blog.

The word Ultrabook has become somewhat of a buzzword in the computing industry in recent times, but many people don’t really know what it means or refers to. What is an Ultrabook?

It really is amazing how fast paced the technology industry it. Go back 3 years and tablets didn’t exist and just 6 years ago smartphones didn’t either.

The first variation on a laptop was the Netbook, which went on sale in 2007. A Netbook a term used to describe laptops which are lightweight, portable, lacking in external ports and cheap. Most Netbooks don’t have CD drives and as far as I am aware none have floppy drives as standard.

Last year laptop makers went a step further in the long-term development of the device and created the Ultrabook. Ultrabooks were designed to be as portable as a Netbook, but the next level up in terms of speed, practicality and storage.

Ultrabooks are very well designed laptops with powerful processors, designed to use less power and therefore have a better battery life. Ultrabooks are like Netbooks in that they are very portable, but they are also powerful.

Most of the big technology firms are now making Ultrabooks. Acer, Dell, HP and Samsung all have their own brands.

The majority of Ultrabooks are powered by Intel’s powerful ‘i‘ processors. Intel Core i3 processors are what you find in most Ultrabooks, these are very powerful and cope well with multiple operations. Some Ultrabooks have Intel Core i5 processors which, are another step up from the i3 – more power leading to better handling and greater possibilities. There are now a few Ultrabooks which run Intel Core i7 processors, which are lightning fast! i7 is rare though, as most people would never need to a processor which that fast.

One recent addition to the Ultrabook market is Acer’s Aspire S5. It is currently the worlds thinnest Ultrabook, measuring a tiny 15mm closed and a staggering 11mm when open – it beets the competition by some considerable margin! Dell XPS 14 for example is nearly 2.1cm when shut (almost an inch) whereas the Aspire S5 is less than 1.5cm. 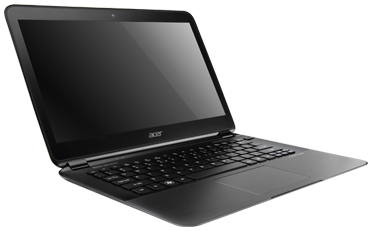 Acer’s Aspire S5 is not only ultra thin, but also ultra light (starting to see why it’s called an Ultrabook?) weighing in at 1.2kg. The screen is an impressive 13.3 inches making it pretty much the same size as a 13-inch MacBook Pro. That said the equivalent MacBook weighs 2.06kg, 0.86kg heavier than the Aspire S5 – that’s like carrying the best part of an extra bag of sugar around with you!

Ultrabooks really do showcase the amazing technological advancements that have been made in the last few years. Devices are getting smaller, thinner, less power hungry and more powerful, and the Aspire S5 is no exception.

Technology firms seem intent on advertising their new devices in the most innovative way possible at the moment, and Acer have produced an advert in-line with this trend for their new Ultrabook. If you are interested, take a look at the ad below to see the Aspire S5 in action – quite literally in action!

So what are your thoughts on the Ultrabook trend? Do you think that portable is the future, and desktops are destined for the scrapheap, or is there a future where they co-exist?

Which is your preferred option, the usually slightly cheaper, but less capable Netbook, or would you rather spend a little more to have a much more powerful, performance built Ultrabook? Personally I would have an Ultrabook any day of the week!

Thoughts and comments welcome below 🙂

The collapse of the global economy has left big business needing to cut costs in every coroner it possibly can. For many executives the solution lies in finding high tech alternatives to many of the most costly aspects of business. One of the most effective ways this is being done is through video conferencing.

The constant stream of meetings and sales pitches being presented all over the world in the flesh accompanied by high priced business class air fairs and four star hotel rooms are coming to an end. More and more organisations are looking to replace this with video conferencing, making international meetings a far quicker and cheaper process.

Video conferencing is already available in extremely fast frame rates at full HD resolutions, but what else can be done to help make the form of communication seem more real. What are the technological developments we can expect in the next decade?

Skype can be used as a video conferencing tool

With video conferencing making global operations affordable for even smaller business, more business are going to be looking to have presence over seas and this will call for low cost translation services.

Translation software is quickly developing; two years ago we saw the iPod app that used it’s camera to instantly translate any written text, and this will quickly be combined with high quality voice recognition technologies that are become standard on the new generation of smart phones. We are not far off software that will quickly and efficiently translate the spoken word.

Previously the types of light needed for this kind of projection were too hot to be used in the kinds of small devices available in offices. However laser lighting means that holographic projectors will soon be able to be built small enough for not only office use, but could also be built into many portable devices such as smartphones.

Flash memory in smart phones could soon be replaced with a new storage format based on this technology, holographic memory. This will greatly increase storage capacities as the same area of a storage device can be used multiple times by projecting the light at different angles, read speeds will also become much faster as holo-memory can be read from many different points in parallel. This eliminates many of the large file size issues that have been hindering the spread of video technology

3 – Video takes over from the written word

As high quality webcams become more standard features on modern netbooks and better integrated with communications services such as Facebook, it is expected that people will begin to move away from writing emails and instead compose video mail instead.

For many a video message is quicker and easier and also seems more personal, now that it is as easy as clicking a button on Facebook to send one it is only a matter of time until they over take emails in the frequency with which they are sent for personal communication. The paper trail that emails leave behind may mean it takes longer for them to be used in business.

4 – A rise in personal broadcasting

YouTube videos are increasingly becoming an entertainment format that rivals television. The content on You Tube that is produced by individuals or very small companies is now genuinely entertaining yet far cheaper to produce than more traditional formats. With cost cutting becoming more essential these lower budget forms of entertainment are only going to increase. This could shift the way the entertainment industry is structured with more talent choosing to run there own company and be there own boss broadcasting themselves over the web.

Also expect to see the medical industries developing more technologies based on video conferencing which will allow doctors to diagnose and treat patients from a distance. Telehealth hardware is already on track to be a $990 million market by 2015 and predictions are that this will continue to $6 billion five years after that.

Chances are if you walk through your local town centre today, you’ll see somebody accessing the internet on their smart phone. It’s almost become a second nature.

Gone are the days of simple WAP access, people are now using their phones to browse their favourite websites and even shop online. In fact, it’s reported that netbook sales are down 40% so is this a sign that smartphones and tablets are overtaking PC’s as peoples preferred browsing method?

So should you create a mobile version of your website? In short, yes, and here’s some reasons why.

Mobile internet use is growing rapidly

It’s not that difficult to create a mobile version

Of course it depends on how your website was built in the first place, but if it’s not archaic then usually incorporating what’s needed to make your website mobile friendly isn’t too difficult and doesn’t require starting from scratch.

The fact is, the majority of websites don’t well on mobiles, in fact some of them are impossible to use, so it’s a great way to steal a competitive advantage and get in early ahead of others in your industry. That said, if you run WordPress or another blogging platform, there are plugins that can make your site ‘mobile friendly’. 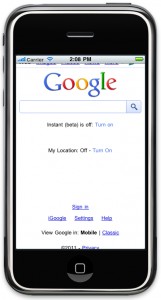 When people use the internet on their phones, they usually have a different intent to a user sat at a PC. It’s usually on the move, and they don’t have much time, meaning they’re looking for something to solve a problem fast. If you do a quick search on mobile conversion rates for ecommerce you’ll find they’re very high. So if you design your site to cater for those needs you’re onto a winner.

It’s way more important than having an app

Since mobile apps became the latest novelty, many businesses have wasted good time and money on developing their own mobile application, of course these apps have their uses, but for the majority of businesses they are a waste of money and wallow at the bottom of the app store.

A mobile website doesn’t require separate development for Android, iPhone, Blackberry and doesn’t need promoting via an app store so is clearly a better choice for getting a return on investment.

Even though lot’s of people are browsing the internet via mobiles, it’s still a relatively new concept, and one that realistically can only every grow upwards due to how technology is advancing. Historically early adopters are the ones that reap the reward, so why wait till everyone else is a step ahead of you?