After a long and fruitful informal collaboration, the Bassetti Foundation and Technology Bloggers have decided to formalize their relationship with a funding agreement.

From 1 November 2020 the Bassetti Foundation will cover the blog’s domain name and hosting costs. This is a fantastic agreement for all parties involved, as it guarantees funding for the continuation of the site while still leaving options open for other partnerships in-line with our values.

As regular readers will know, co-editor Jonny has been working with the Bassetti Foundation for many years, supporting their aim to promote responsibility in innovation. The blog and the Foundation released a joint pamphlet in 2012 based upon a series on the blog called Can We Improve The Health Of The Planet?, an early sign of what was to become an enduring relationship. As editors, we understand and share the goals and aims as well as the values that the Foundation stands for, and the mutual respect and trust offered in return is appreciated and valued.

As editors and authors, we try to highlight underappreciated positive projects/organizations in the world, and promote what we see as technological developments that aim to improve the lives of everybody across the planet.

Jonny started writing for the blog in July of 2011, 3 months after Christopher founded it, and while there has never been a policy on topic areas, the site has developed a view on technology and science and the environment thanks to our shared interests and similarity in positions.

Jonny was new to blogging and Christopher offered him the necessary experience, technological skills and platform to engage with a new audience on matters of ethics and some of the broader implications of technological development.  In return Jonny offered expertise in the rapidly developing field of Responsible Innovation.

Education and critical thinking are fundamental goals for both of us, we share a passion for communication, for enthusing people with the possibilities that the future holds while highlighting the social and ethical aspects of what this might all mean.

We have both learned a lot working together and editing the website over the last (almost) ten years. We benefit from the fact that we both have different expertise, both technical and philosophical. We have influenced each other’s thinking and paths, opened new opportunities and developmental possibilities.

The blog was originally conceived the as a community technology blog, and in its early years a range of posts from other writers were published, but recently the posts have all come from the editors ourselves. This reflects our coming to a shared position on technology and science, the blog follows a shared line and has its own identity, which seems to pay off. Readers seem to share our passions, and having had consistently healthy traffic figures since the blog started, we are sure we are having the desired impact.

We try to put all of this into practice, as we both believe that “we must be the change we wish to see in the world”.

We would like to thank the Bassetti Foundation, all of our readers and contributors and look forward to continuing our fruitful (and enjoyable) relationships with you all.

Out with the old and in with the new once more. Last month it was Blockbusters, the global giant of video rentals, closing their last few doors for the last time in the USA, as they filed for bankruptcy. Technology has overtaken them, their model of offering films for rent is obsolete. 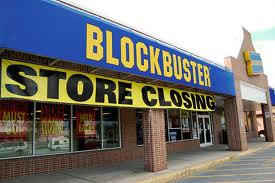 Many stores are closing

Even in the UK where I grew up there seemed to be one on every corner. I used to walk round of an evening and thumb through the Betamax section (my mum had Betamax, much better quality than VHS, not widely used in a domestic setting but still used today for broadcasting).

For youngsters reading this article, the idea was that you take the film home and watch it and then return it the day after. Yes I know it sounds ridiculous, but if you forgot to return it you paid overdue fees, and these alone made $800 million in the year 2000, and that was less than 20% of the company’s operating profits!

And the rise was incredibly fast. In its first 15 years of operation Blockbuster grew from nothing to more than 9000 stores, even today it still boasts 3000, although they have been losing money hand over fist for more than a decade.

Netflix put an end to the party, but how could such a giant in the entertainment industry miss out on an opportunity to move forward. Back in 2002 they could have bought the Netflix operation for next to nothing, but the then CEO never thought it would take off. How wrong could he be?

Well here in Cambridge Massachusetts they have devised a system in order to try and stay on track with such developments, although I am not sure it is a good one. There is a huge culture of start-up funding, with an entire industry revolving around funding such new ventures.

We have the Mass Challenge competition that gives away more than a million dollars a year, loads of networking meetings and funding workshops. But what are these investors looking for? They are looking for the next Netflix or Amazon obviously, and they are prepared to put large sums of money into anything that looks like it might develop into something of the sort.

There are a lot of start-ups here that manage to spend a million a year for several years without ever turning a profit. A few hundred thousand on lawyers each year, nice office space, public presentations, and the investors keep coming in looking to make a fortune on the next new thing.

Just to give an idea of how much money is invested if we take a look at Mass Challenge they have invested $472 million in the last 4 years, and that has made a return income of $194 million. This investment has created 3928 jobs although we don’t know how many of them exist today.

All well intentioned I am sure but that means they have so far lost $278 million in 4 years. But they have created jobs, although at a cost of almost $71000 each. Not a great return, but we are talking about a not for profit organization investing private money so presumably everyone is happy.

I just wonder whether a more efficient model could be found, while not missing out on the next best thing of course. And I wonder how ethical investment choices are made. We are dealing with huge resources, and resources are the key to shaping the development of society. How much of this money could be said to be invested for the good of society? And how long can this type of approach continue whan 3 out of 4 fail?

I should just add that I use Zipcar, a local car sharing start up, so I don’t want to sound too critical. They have taken many cars off the road, which can only be a good thing. Several other food start ups work for social good, but they feel cut out of the funding cycle. See this post I wrote for IX about their positions.