Steve Jobs, co-founder, chairman and chief executive of Apple – one of the biggest, most profitable and most well known brands around the world.

Many believe that Apple is where it is because of this remarkable man, and say that without him, Apple would most probably have failed many years ago.

Jobs was a one of the kind sort of man. He was for many years the face of Apple, as it seemed that nobody could ever really match his charisma, innovation or genius.

When the firm was struggling in the 1990’s, Jobs returned, and saved the business, setting it on its path to become the second most widely used global operating system.

In 2003 Jobs was diagnosed with pancreatic cancer. He took leave three times between 2003 and 2010, before finally resigning as CEO in August 2011, because of fears over his health.

Jobs was one of the richest men in the world when he died, and was also one of the most well known and influential people of modern times.

It is said that Apple’s marketing department used to consisted of Jobs looking in his mirror and asking himself what he wanted.

Apple’s competitor Google has paid tribute to Jobs on the home page of its global search engines. 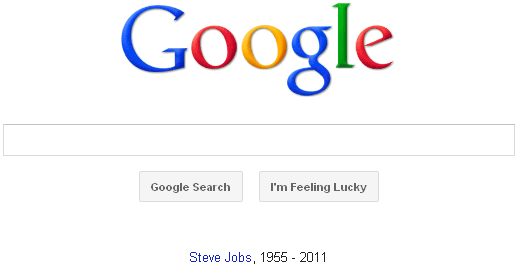 The link on Google’s home page leads to Apple’s homepage, which has a tribute to its maker, which takes up the entire page – just showing how important he was to the company. 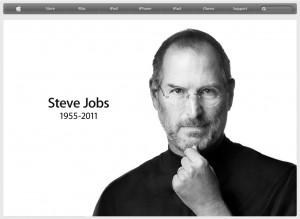 Steve Jobs on the home page of Apple, as a tribute to the man who many believe made the company a success

If you click on his picture, you are taken to a page which pay’s tribute to the legend in the classic Apple way – a clear, white page, with just a paragraph of text paying tribute to him.

Today the world has lost a great man, and has been left many unanswered questions.

Who will take over from Jobs? Will Apple now become just another technology giant, lacking in personality, eventually destined for decline and failure?