Recently there has been a lot of talk about a third industrial revolution in the making. It is of course that involving 3D printing. Take a look at the other articles on the website for an overview.

The thing about these machines is that they can produce individual tailor made objects at low cost, something that was not really possible in the days of mass production, when multiples were cheap but individual one off projects very expensive.

It is a contentious technology though for several reason, the first being its versatility. A few months ago we had the first fully printed gun, the plans were put online for free before being removed but only after more than 100 000 people downloaded them.100 000 more unlicensed guns in the world possibly. Check out this article.

Another reason is that these machines will completely change manufacturing. The old days of heavy machinery in production lines might be numbered, and this means that the power and financial strength that the organizations that have control of these systems currently posess is about to be lost.

So where should somewhere like MIT here in Cambridge MA stand? They have to support new technology, it is their job, but in doing so they might be undermining their own foundations, rooted as they are in large scale US industry. 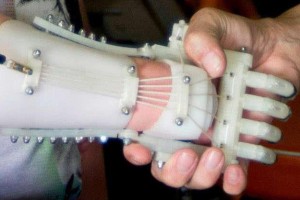 As well as the printable gun though there are obviously a million good uses for this technology. Two weeks ago I mentioned an engineering company that is testing an aeroplane engine that uses printed parts, and in case of dire need you can now print a prosthetic hand for about $150 through an open source website. Read the article here.

Last week the Bassetti Foundation sponsored a series of events in San Francisco based around these problems. One of the main speakers was Chris Anderson, ex editor of Wired magazine and author of the book Makers, he is a leader in thinking on these matters. There is plenty of information on the website for interested readers, including videos of the symposium about the political and social implications of a move towards 3D printed manufacture. 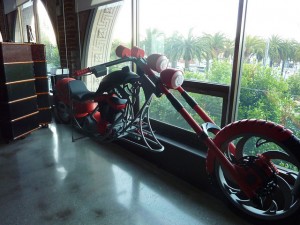 Check out the photos too, here is a printed motorbike. They can produce far more than you imagine.

8 thoughts on “The Third Industrial Revolution”