A week or so ago, a company approached Technology Bloggers and asked if I would be willing to review some of their products. I thought that this could be some fun, so I emailed them back saying: why not! They then send me a Pocket Boom to test and then review – this article is that review.

Please note, the opinions in this article are mine, and are completely honest – I am not being paid to write a review for them.

What is the Pocket Boom?

The Pocket Boom is a device that can turn pretty much any surface into a speaker. You just plug in your music – be it from your iPod, computer, tablet, stereo or whatever (anything that has a 3.5mm headphone jack) and place the vibrating speaker onto a surface, and it will vibrate the surface to turn it into a speaker.

What Surfaces Does the Pocket Boom Work on?

The clever technology in the vibrating head on the device is able to vibrate any surface and turn it into a speaker. However, on some surfaces, it vibrates it so little that the vibrating head is louder than the surface. Surfaces that I have found to be bad speakers include:

Surfaces that I have found to work really well include:

Does it Actually Work?

My answer is simple. Yes.

You can be sceptical, but I have one and it does. As I mentioned above, some surfaces it really surprises you by how well it actually transforms that object into a speaker, whilst with others you can be left somewhat disappoint with the sound level – but never the less it does turn it into a speaker. 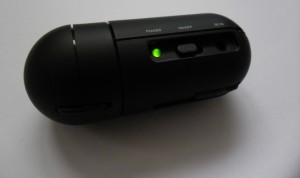 The Pocket Boom with all leads stowed away (Compact)

From my personal use of the speaker, I would say that I think it works amazingly well on around 15% of objects, well on 70% of objects, and rather disappointingly on the other 15% of objects. So around 85% of objects to hand should be able to be converted into a good speaker pretty easily!

Check out this video to see it in action 🙂

Is it Easy to Use?

Clearly a lot of work has gone into designing the Pocket Boom, it has some great ideas behind it. The ergonomics need some tweaking before the product is 100% perfect.

The 3.5mm headphone jack lead that comes out to plug into your device is way too short to be practically used with most devices. That is a major flaw, but this has been fixed, as included in the box is an extender lead, so you can get an extra 40cm (ish) of reach. 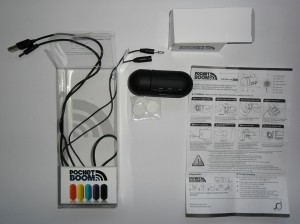 The items that come with the Pocket Boom

Inserting the batteries is really easy, literally slide back a cover, put them in and slide the cover back on. Dead simple.

The enclosed instructions do tell you how to pull out the speaker wire, so that you can place the vibrating speaker head on a surface, however I found them very hard to follow. I found a video on YouTube about how to do it though, and that cleared things right up, just pull the wire out whilst rotating it round at the same time – effectively pulling and unwinding. 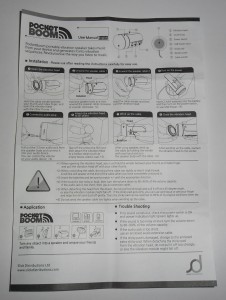 The instructions that come with the Pocket Boom

One thing that I am still a bit puzzled about is the suction pad system. The speaker head has an adhesive suction pad on it so that you can stick it to surfaces easily. It does get dirty, and I have found that covering it with sellotape and then slowly removing the tape cleans it up and it becomes sticky again. In the pack some extra adhesive are provided, however I can’t seem to find any instructions as to how to change the pad. Hopefully when I need to it will be pretty easy.

I have so far been very pleasantly surprised by the life of the battery. Considering this is a device that is designed to effectively replace most speakers, it uses very little power. Normal speakers can be power hungry, however the Pocket Boom takes just two AAA batteries.

I have had my Pocket Boom vibrating and turning objects into speakers for around three hours now, and despite it being powered by just two AAA batteries, it is still working just as well now as it was when I started using it. The Pocket Boom would appear to be a great saver of energy, considering that two speakers would be unlikely to last that long, producing the kind of sound levels that the Pocket Boom can.

How Good is the Sound Quality?

Okay, so it is portable, can turn almost anything into a good speaker, uses less power, therefore its weakness must be in its sound quality right? Wrong.

Personally I am very impressed with the quality of the sound the Pocket Boom can produce. I have used it on many surfaces, and found that everyone produces a slightly different quality, pitch and intensity of sound. Some produce music with much deeper bass levels, whilst others just produce really loud music! Some substances I would like it to go louder, but the volume level is always reasonable.

Depending on the song you are playing, the sound produced will vary. Sometimes you need to turn the volume down slightly, as the speaker head vibrates too much and doesn’t sound that great, but turning down the volume easily fixes this.

One thing I have noticed about the Pocket Boom is that it works better in quieter environments. Also, the size of the room seems to affect how well it produces sound, as it can really affect the acoustics. I have personally found that it works far better in small rooms than it does in bigger ones. If there is also a lot of noise, it doesn’t work as well, but for most environments it works really well.

I currently have it plugged into my PC, using the machine (metal) as the speaker, and it works really well. The environment is relatively quiet, and the volume of my PC is only on 20%, yet the sound is much louder than if it were through headphones!

Is the Pocket Boom Value for Money?

When I reviewed the Kymera Magic Wand I bought, I concluded that it was a great novelty product, but not really value for money at £50.

I think the Pocket Boom also has some novelty element to it, which you get when you first use it. I ran around testing it on everything I could! That has slightly worn off now, but the product is very practical and does work. As I said, I am using it as a speaker for my PC, and it is working very well.

The Pocket Boom retails at £20 (£19.99) which I think is a very reasonable price. I think that the novelty factor of the boom is probably worth £5 to £10, but after that you have an extremely practical product, which you find uses for in your every day life.

If you prefer to listen to high quality music, amplifiers and professional loudspeakers are probably for you, the Pocket Boom is not the best of speakers, but it is a bit of fun.

If however you are someone who just likes to casually listen to music, and the occasional bit of fun (as you find a new surface to try out!) then the Pocket Boom is a must have gadget! 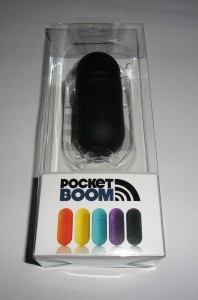 The Pocket Boom in its packaging

As I said at the beginning of the article, this product has been sent to us to review. This company is called GearZap. Our thanks to GapZear for providing us with the pocket boom 🙂

Smart phones are amazing. 50 years ago who would have predicted that you could hold a device smaller than your hand that could:

Notice anything that could be a security risk from the list above? Well if you listen to the news, you will probably have heard the bad PR iPhone have got themselves by discovering a glitch which showed everywhere their owners had been!

Apple have denied that they have been tracking users, but if someone got hold of an iPhone they would be able to download a list of every place that that phones (and probably it’s user) had been to, via the use of GPS.

Do you think that all these flashy features come at a price? Is the security of our private information being exposed more and more in this modern-day ‘technology powered’ world?

The thing is, it isn’t just the iPhone – the iPad has also been tracking users locations!

If you want to find out more, check out this online Q and A page on Apples website.

A few days later Sony announced that it was taking down its PlayStation Network service, due to hacking which affected 77 million gamers!

Sony say that that the data might have fallen into the hands of an “unauthorised person” following a hacking attack on its online service. This data it thought to include things like names, passwords, addresses, date of births and email addresses. Another reason why it’s very important not to use one password for everything.

If you think you might have been affected by this other breach in security, check out Sony’s blog post on the issue.

Are we too dependant on technology? Do we give away too much information (often sensitive) about ourselves? Do firms really need all this data from us, and do they need to take a greater responsibility in implementing more measures to keep our info safe?